Home | The Most Common House Spiders (And What to Do If You Spot One!)

In a recent study, researchers found that the average American household has between 32 and 211 different species of bugs living inside of it.  Many of those were the eight-legged variety, ranging from the usual cobweb spiders to more obscure species such as spitting spiders and ghost spiders.

If you’ve ever spotted a creepy crawler making himself comfortable in your home, you know how intrusive it can feel. That’s why it pays to know what to look for and how to deal with the pest.

Today, we’re sharing an in-depth guide to the most common house spiders. We’ll also tell you the steps to take when you discover that one is taking up residence in your abode.

Ready to reclaim your space once and for all? Let’s get started. 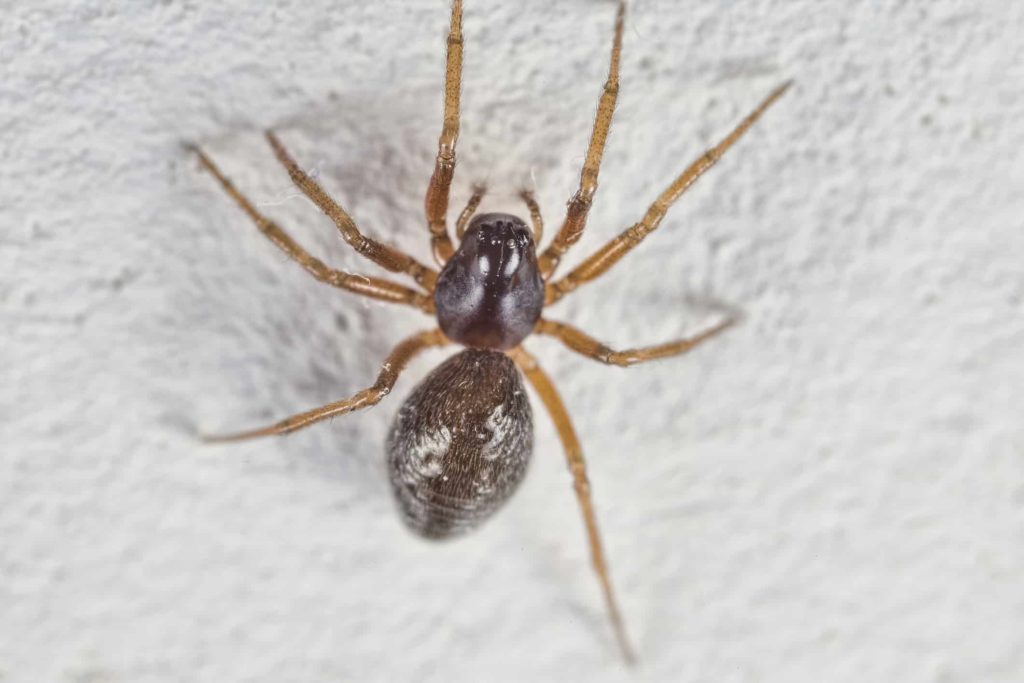 Let’s start our list with the most recognizable and harmless arachnid: the American house spider, or Parasteatoda tepidariorum.

Though this comb-footed species might look icky, the most annoying issue you’ll encounter is the annoying cobwebs they’re known to leave. You’ll find the cotton-candy-like strings in unswept corners of your floors, ceilings, and places that are difficult to clean, such as behind bookcases.

These pests are part of a larger species of spiders known as cobweb spiders. You’ll also find evidence of their presence in your basement, crawl space, attic, and crawl space. Let’s dive into a few of their distinguishing characteristics.

American house spiders are usually brown or tan. Some species are gray with dark brown patterns on their backs.

These spiders can range in size from small to medium. The average one is about the size of a nickel, legs included.

The American house spider has a round, full-looking abdomen. This is one way to tell it apart from other species that tend to have more elongated abdomens. 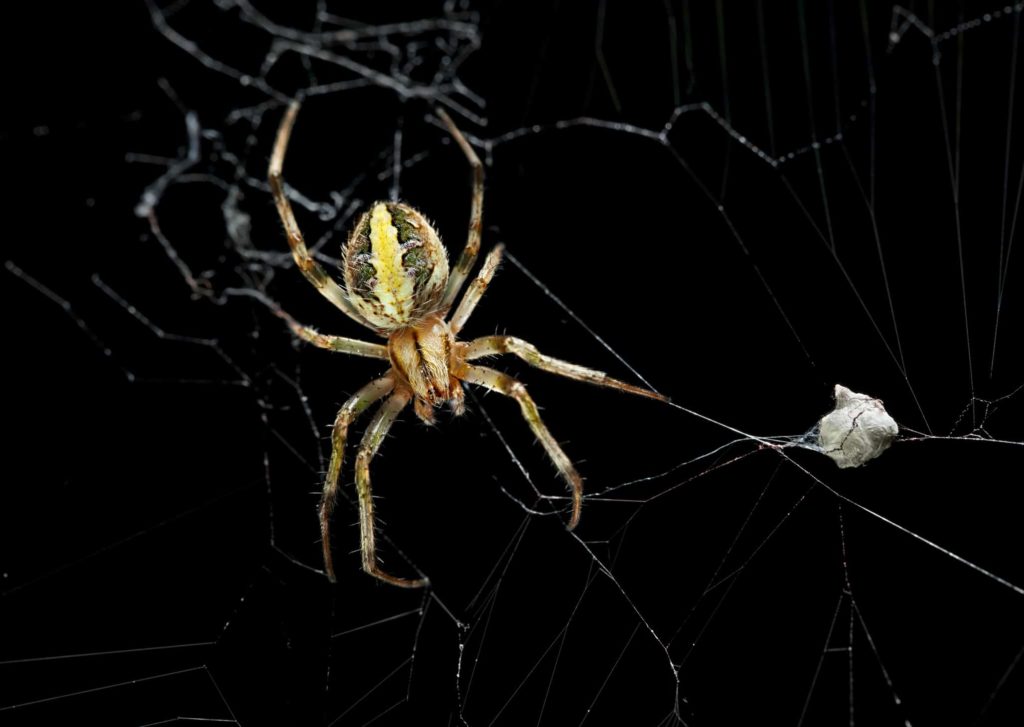 Species of sac spiders can belong to any of the following different families: Clubionidae, Miturgidae, or Corinnidae.

Unlike the American House Spider, a sac spider does not spin a web. Yet, it is often more prone to biting. Though they usually feed on small insects or other spiders, they are known to travel into living areas in the homes they inhabit.

If a sac spider bites you, you might notice some slight swelling or inflammation at the site, along with soreness. You may also notice a white pustule form as the bite heals. A small portion of the population is especially sensitive to these bites and may develop a reaction that requires treatment.

Most sac spiders are yellow or beige. Some are also a pale, yellowish-green.

The average sac spider is about one-quarter to one-half of an inch long. These spiders have long, oval bodies.

While sac spiders do not make spiderwebs, they do create silken nests, or sacs, that they rest in during the day. You’ll usually find these sacs high along your wall or on your ceiling. 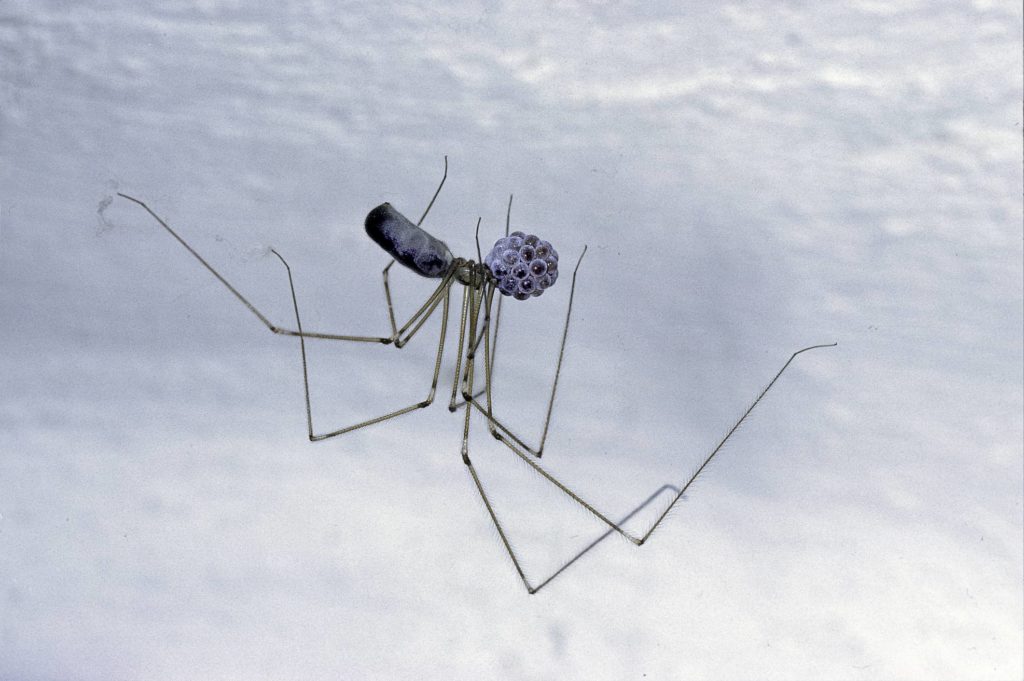 When you first notice a long-bodied cellar spider, you might mistake it for a similar-looking arachnid: the daddy longlegs!

Yet, while these two pests do look alike, there is a significant difference that distinguishes one from the other. Daddy longlegs isn’t technically spiders. Instead, they’re outdoor creatures that only have one main body portion and two eyes.

On the other hand, spiders have two central body portions. Also, most species also have eight eyes. Thus, though the daddy longlegs looks and moves like a spider, it doesn’t make our list.

The long-bodied cellar spider, or Pholcus phalangioides, loves to hang out in the dark, cool, musty corners of your home. That means you’re most likely to find one in your basement, cellar, crawlspace or garage than anywhere else.

Long-bodied cellar spiders are usually pale yellow, brown, or tan. Some are grayer in color.

These spiders are around one-fourth to three-eighths of an inch long. They have a small, round body and trademark long, skinny legs.

A long-bodied cellar spider will have skinny legs that are narrower than most arachnids. There are around 20 different species of cellar spiders found throughout the United States. 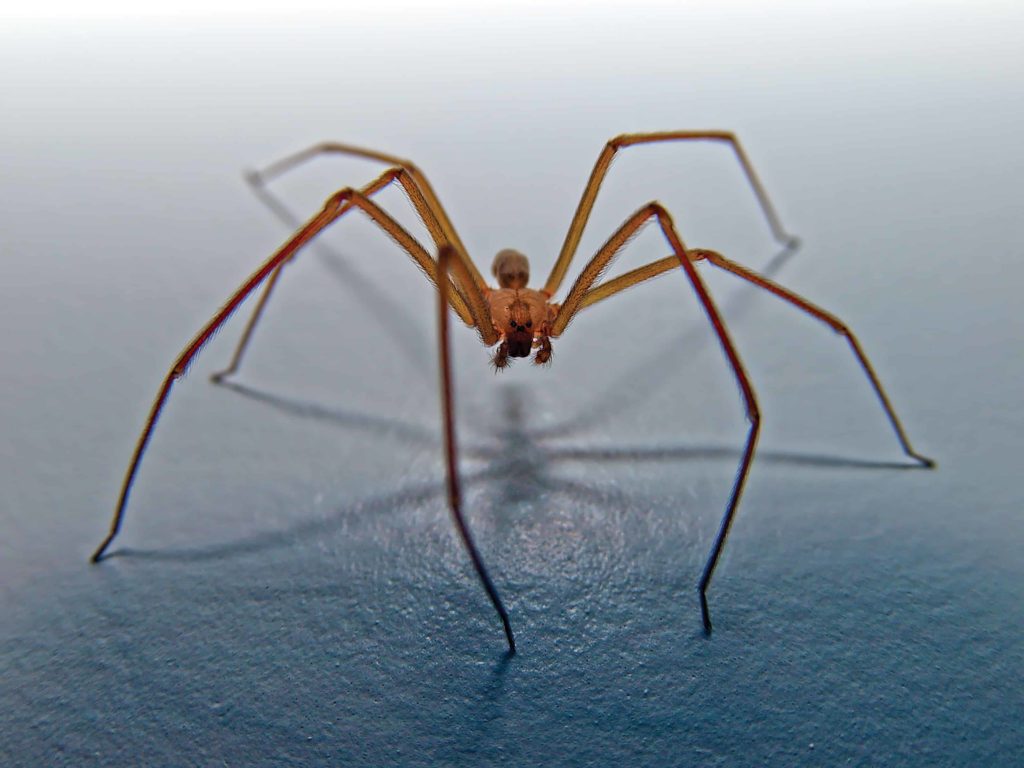 These are the creeping pests with a reputation scary enough to frighten a grown man!

Why the bad rap?

The venom contained in a brown recluse contains a dangerous cytotoxin. If you’re bitten by one, that cytotoxin affects your muscle tissue at the bite site.

his can cause a range of hazardous and even life-threatening reactions, including:

If a brown recluse spider bites you, it’s essential to seek medical attention as soon as possible. Children usually are more susceptible to dangerous reactions than adults, though everyone should be checked out by a physician just to make sure.

The scientific name for these spiders is Loxosceles reclusa. The brown recluse spider is part of the more prominent brown spider family. It is established in 15 states across the country and does not discriminate based on environment or climate. You can find brown recluse spiders in every corner of the United States, from warm and humid Florida to dry and arid Arizona.

The most common places you’ll find these spiders include:

In addition to being quick, brown recluses are also good at hiding and clinging. As such, they often enter homes in boxes or bags.

Most brown recluse spiders are brown or gray. They have long, skinny, pale legs.

These spiders are about one-third of an inch long, with an oval-shaped body. They have three pairs of eyes that are arranged in a triad formation.

One way to identify brown recluse spiders is to look for the violin-shaped mark on their cephalothorax. This is the area between their eyes/neck and abdomen. The violin’s body is located near the spider’s eyes, and the neck elongates backward, ending right before the abdomen begins. 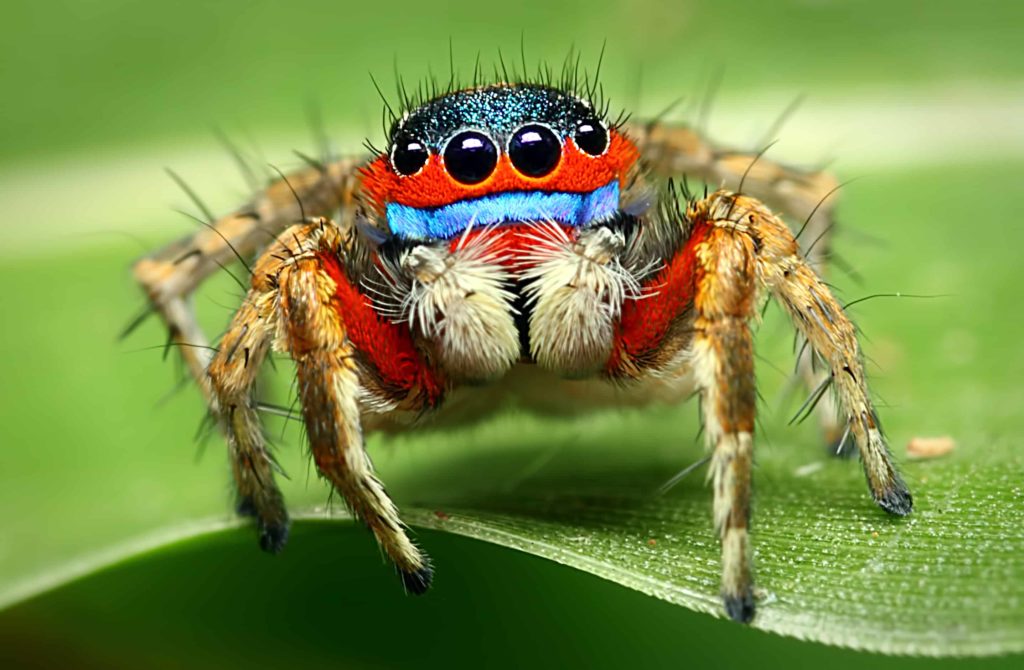 Have you ever opened your shower curtain to find a hairy, jumping spider looking back at you? Able to leap surprisingly far distances, they can be difficult to catch.

Belonging to the Family Salticidae, these spiders are active and out hunting for prey during the day. They can be found in almost any part of your home, though they tend to spend the most time near surfaces covered by daylight. To that end, look for them along your window sills, walls, and doors.

Yet, be careful and approach with caution if you do find one. These spiders can deliver a bite that feels similar to a bee sting. Though the bite does not cause an adverse reaction in most people, it can cause others to fall ill, especially small children or anyone with a spider bite allergy.

There is no one-size-fits-all color for jumping spiders. They can be found in a range of colors from black and brown to tan, beige, and even gray.

Compared to other species, these spiders have a more squatty, compact shape. Still, they are some of the biggest on our lists. Some jumping spiders can be up to an inch or so long!

The jumping spider is covered in short, dense hair. Another feature that sets it apart is that its front legs are longer than the other legs. 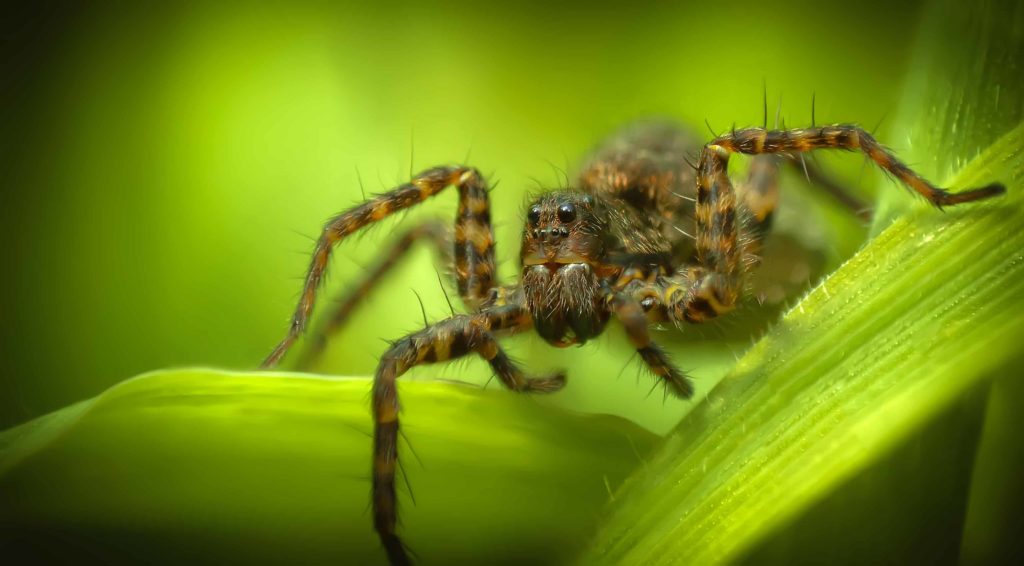 As their name implies, wolf spiders, or Family Lycosidae, are the largest ones on our list. Though this the case, don’t be fooled into thinking they’re big and clumsy.

Rather, wolf spiders can nimbly sneak into your home via the most narrow, tiny avenues. For instance, they can travel up through cracks in your foundation or windows. They can also move in from the outdoors and enter through your attached garage.

While they share a similar appearance to brown recluse spiders, these are nowhere near as dangerous. Yet, their bite can cause a reaction in someone with a spider bite allergy, so it’s important to be careful if you handle one. Due to their substantial size, some people even choose to keep wolf spiders as pets!

Like most indoor spiders on this list, wolf spiders are usually brown, tan, or gray. In addition, most species have dark markings, such as stripes.

As mentioned, wolf spiders are gigantic in comparison to their peers. Most measure more than one inch long.

Wolf spiders have an elongated, narrow body. They also have distinctly hairy legs and a unique eye arrangement. 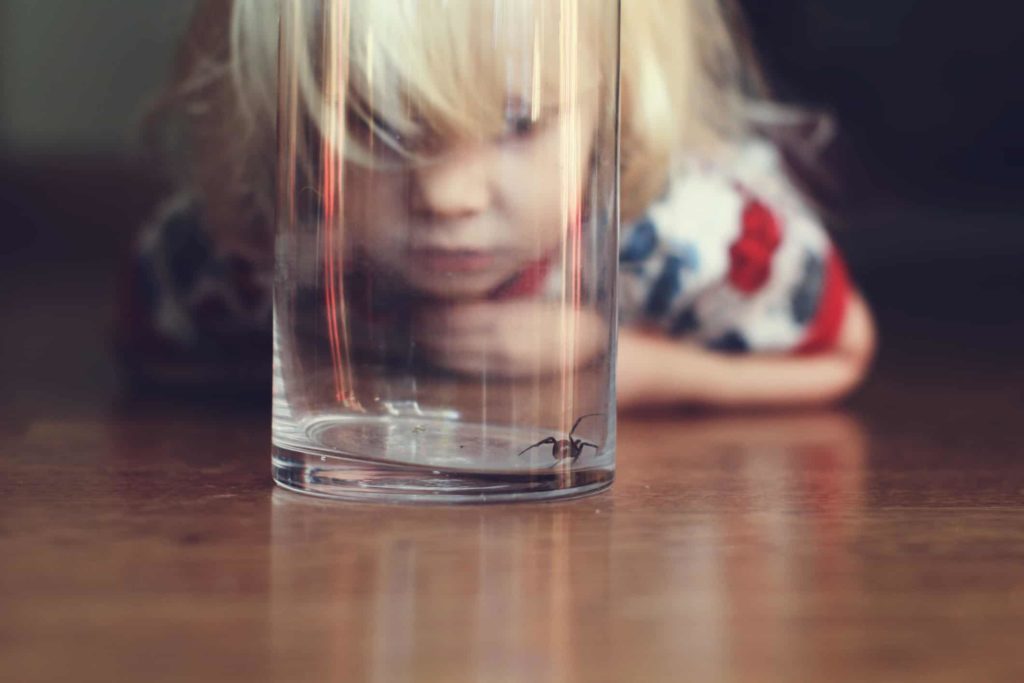 What to Do If You Encounter a House Spider

There’s nothing like a human-spider showdown. You’re hunched over holding a shoe, and it’s darting back and forth to escape. Yet, while this might be the knee-jerk way to react when you spot a spider, it isn’t the most humane.

First, the most important thing is to try not to panic. While there are around 50,000 different species of spiders worldwide, only about 25 species contain venom that could cause a human to fall ill. That means you’re far more dangerous to most spiders than they are to you.

That said, what steps should you follow to remove a house spider? Let’s take a look.

If you notice a spider in your house and feel confident that it will not hurt you, the first thing to do is cover it with a glass jar or container. Make sure the container is big enough to cover the spider on all sides.

Then, slide a piece of paper or cardboard between the jar and the floor to create a makeshift seal. You might prefer to wear thick gloves during this part to protect your hands if the spider can wiggle free.

Step 3: Take It Outside

When you’re finished, take it outside! Look for a place far away from the house and set it free.

What happens if the spider is inaccessible? For instance, it might be in a tight spot, such as a windowsill. In this case, wait for a while and follow those three steps above when it decides to come out.

When to Call Pest Control

If you identify the spider as a dangerous species, such as a brown recluse, never try to remove it on your own. Even if you can’t discern its special marks and you’re not sure what kind it is, it’s wise to err on the side of caution. If you’re afraid to go near the spider for any reason, it’s always best to call a professional pest management service.

This way, a certified and experienced technician can come to your home and safely remove the pest for you.

No one likes to share their home with an uninvited stranger. That’s why it can be so disheartening to find one of these common house spiders crawling around on your living room floor.

With this guide in hand, you’ll be able to identify better which species you’re dealing with. This way, you can take the right precautions when it’s time to remove it from your home. While not every spider contains dangerous venom, it’s best to get rid of any that you find, especially if you suffer from insect-biting allergies!

A professional exterminator is the best resource to keep on speed dial. The right one can take care of the problem, ease your mind, and save you money on costly sprays and chemicals.

Are you looking for more trustworthy advice on how to protect and secure your house? Check out the Home Services section on our blog!

How To Get A Loan With Bad Credit

How To Find A Good Contractor For Your Home Improvement Project

Where To Turn for Car Payment Assistance In Economic Tough Times